The City of Corona 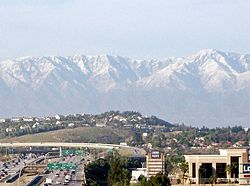 Corona is a city in Riverside County, California, United States. As of the 2010 census, the city had a population of 152,374, up from 124,966 at the 2000 census. The city of Norco and Riverside lie to the northeast, Chino Hills to the northwest, Yorba Linda, and the Cleveland National Forest to the southwest; unincorporated areas of Riverside County line all of its other borders.

Corona, founded at the height of the Southern California citrus boom in 1886, is advantageously situated at the upper end of the Santa Ana River Canyon, the only significant pass through the Santa Ana Mountains. The town of Corona once laid claim to the title "Lemon Capital of the World." A museum there presents the lemon's former role in the local economy. The city derived its name (and its nickname, The Circle City) from the curious layout of its streets, with a standard grid enclosed by the circular Grand Boulevard, one mile in diameter. The street layout was designed by Hiram Clay Kellogg, a civil engineer from Anaheim who was an influential figure in the early development of Orange County.

Many homes for sale in the Corona area are single-story family homes that have between three and five bedrooms. They typically range from 2,300 to 3,600 square feet, and a good number are located in established neighborhoods with home owners' associations. Corona is located in Riverside County, in between Norco and Riverside proper. Other nearby cities include Chino Hills, Eastvale and Yorba Linda. Corona is also close to the Santa Ana Mountains and the Cleveland National Forest. The town's original name was South Riverside, and it was established as a citrus farming community during the late 1800s. It has since been developed as a bedroom community, and many residents commute to jobs in nearby Orange County as well as the Inland Empire.